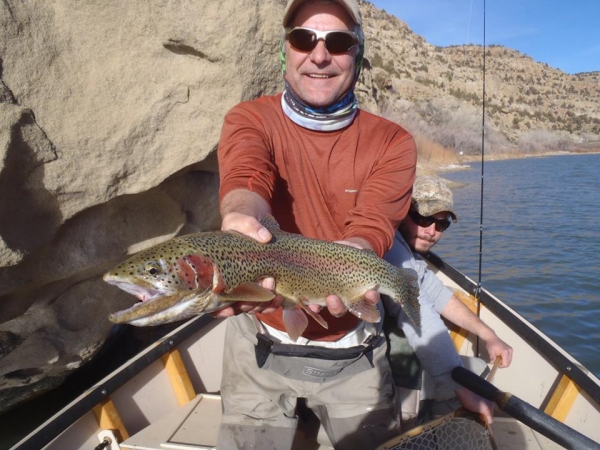 The fantastic weather streak in northwestern New Mexico continues! With daily highs in the 60’s, who would know that it is the middle of winter?

San Juan River trout seem to like the warm weather as much as the fly fishers. A couple of Rainbow Lodge guests spent the last three days on the river fishing two days with guide, Ben Hahn, and one day fishing on their own. By stripping leaches and dead-drifting woolly buggers above black midges, the anglers caught numerous rainbows and browns from Texas Hole down to Crusher Hole.

Last week we reported that dead-drifting a leach/midge combo with extra mends and twitches was the way to entice strikes.  This week, it seems that more motion (bigger strips, more and larger line mends) is the way to go, especially in the deeper runs like Texas Hole, Three Island Run, and Death Row.

Most of the trout we have caught in the last several days fell for large leach patterns and wooly buggers, heavily weighted, and stripped aggressively. We cast them into the current, give a quick upstream mend, let them sink a moment, then begin a strip, strip, pause sequence. Longer strips and a quicker rhythm fooled our biggest trout.

When dead-drifting, we have been catching the majority of our fish on black midges of various patterns in sizes 20 and 22, fished below a flashy wooly bugger about 4 ½ to 5 feet below a strike indicator. The most productive midges have metallic ribbing and bead heads or krystal flash wings. The best wooly buggers seem to be lighter colored – white, ginger, grey – with LOTS of flashy material in the body and tail.

This is a great time to fish the San Juan. The weather is great, crowds are non-existent, midge hatches are heavy, afternoon baetis mayfly hatches are good, and numerous small, black flying ants are buzzing around the river.